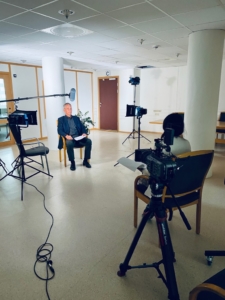 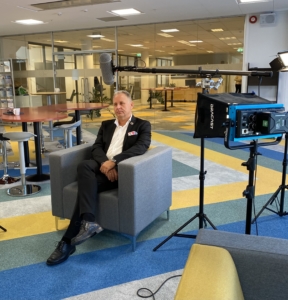 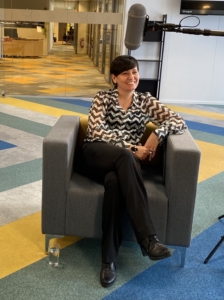 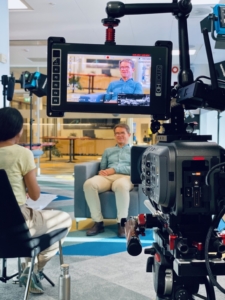 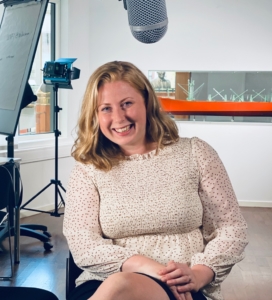 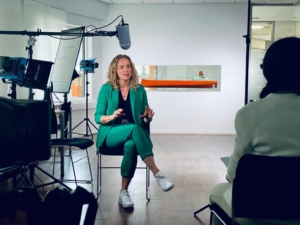 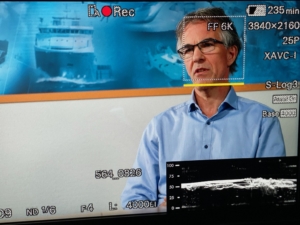 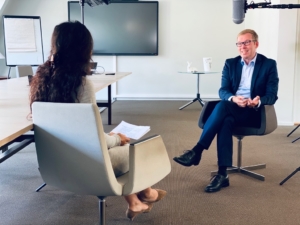 Kildn, The world’s first zero emission port is intended to be built in Askøy, outside Bergen. The port is estimated to be completed by 2026. The main goal is for the port to be self-sufficient with renewable energy, and create hundreds of new, green jobs.

The project is developed by SAMS partner – COWI Norge, commissioned by Tertnes Holding AS and Rexir Holding AS. Autonomous mobility solutions together with green energy are used as part of a sustainable future-oriented port.

The port project was launched on Tuesday, May 19 from the Grieghallen in Bergen. Read more about the project here.

The intention is to build the world’s first zero-emission port for international, national and local traffic in Eidsvika on Askøy, outside Bergen. The port will be the first of its kind and will serve as a turning port for cruise ships, as well as a home port for fjord tourism and for the regional blue city lane. Now we are looking forward to good discussions about how the vision can become a reality, says Filip Rygg, CEO of Rexir Holding.

The vision is a direct response to the zero emission ports, the national and international political leaders demand. COWI has drawn up proposals for a new compact and smart port, where the foundation for mobility in the region has been focusing at sea. The vision shows innovative solutions, concepts and principles that have not been adopted before, says Håkon Iversen, Head of Marketing and Development at COWI – who has also been project manager on the assignment.

The task has consisted of visualizing, conceptualizing and realizing the customer’s vision of a new turning port for cruise ships and the home port for Hurtigruta in Western Norway. This has resulted in a vision study in which the overall perspectives establish a new future for a new port.

The port can be an important part of an extensive urban development in the area, with both underwater restaurants, hotel and conference activities, research and other activities related to the energy and destination sectors. The harbor can also become a destination in itself. Rexir Holding believes in major impacts on the entire region, with new jobs in Askøy and the rest of the region.

COWI has developed the vision study for Tertnes Holding and the real estate company Rexir will further develop the project. The government aims to establish emission-free ports by 2030 in its action plan for green shipping.

Peter Due starts as CEO of Yeti Snow Technology this year. A company that develops technology for autonomous snow removal vehicles.

Like many other technology companies, Yeti’s employees are all working from home. Truly a challenge for all of us, say Peter Due who comes from a position as Executive Vice President of Yara Birkeland. Yeti is located at Dyrmyrgata 47 and Peter is sitting alone but can’t wait until all is back to normal.

It would have been great to shake hands and talk to people face to face, but it must wait, he says.

Now in the beginning they have had meetings on Skype, and he spends his time getting to know the employees. Nobody knows when the staff will be back in the office, but he has embraced his new role.

I am excited about the technology and the opportunities that exist in the company. Yeti have a huge potential, which over time will be even bigger, says Due.

Due is truly passioned about his leading principals and the importance of given the employees the ability to develop and use their competence.

We are all colleagues, and I am not very concerned with hierarchy. We all have different functions, roles and responsibilities with strengths and weaknesses. With focus on common goal and have fun at the same time, I am certain that all employees will enjoy working and will come to work every day.

Is this a natural transition then? Yes, the keyword is autonomy.

Yeti is a subcontractor to Øveraasen on Gjøvik, which has signed a contract with Swedish Avinor, Swedavia, to supply autonomous snowploughs on the airport. Yeti is also developing for other types of construction equipment, and will, among other things, deliver an exciting project to the AF-group this year. Many of those who work for Yeti are employed in Semcon Norway. 15 employees work today for the company and they will increase to 20-30 employees in a short time, according to Due. Yeti was established in 2015 in a collaboration between Semcon Norway Øveraasen and Husqvarna has come on board. An importation milestone with a large player. The company had reached a point where the board would step up the business with a professional, General Manager.

We were looking for a unique person with experience from start-up and business, and now we have found the absolute right candidate for this role, says Hans Peter Havdal.

Havdal is through the position of CEO of Semcon Norway chairman of Yeti and is pleased that they reached agreement with Due.

Other types of jobs

Due is probably known to many in Kongsberg as the one who operated Friluftskompaniet for many years. But after that, he worked in Kongsberg Maritime. First with dynamic positioning, then the walkway project for service on offshore wind turbines and finally as Head of the autonomy program.

That experience gave him the job as Executive Vice President of Yara Birkeland, “door to door” – autonomous, zero-emission transport solution. Yara Birkeland has already started production at Herøya, where containers are automatically filled with fertilizer. The containers are picked up by autonomous and electric portal cranes and load carriers who drives to the quay. Automatic and electric crane both loads and unloads the ship Yara Birkeland. The ship will depart from the quay and sail all by itself either to Brevik or Larvik harbour, the voyage is monitored from a control center on land.

Technology creates new possibilities and jobs. The development of self-propelled units has created a future need for control room operators. In addition to IT competence, the requirements for these operators will be the same for manually controlled units. The difference is that they become responsible for several units in the same operation. This also applies to those who will use the technology provided by Yeti. Autonomy also means increased safety of those who work in high-risk environments, because the employees are physically not at the place where the job is performed.

Due is not an educated engineer himself, but says he probably would have chosen that direction today.

Technology helps solve problems and help people. Referring to my own Apple TV and Apple watch that I consider important tools in everyday life.

Technology within Healthcare can change life.

As we grow older, the clock will monitor you by sensors who will detect changes in your body. The sensors can control body temperature, blood pressure and insulin levels. If you fall and not be able to get up again, sensors will react and contact your home nurse.

Right know, Peter Due will assist Yeti in delivering technology to autonomous snowploughs and construction machinery. Autumn 2021, the first commercial vehicle will be in operation and available for the customers.