The 3-day program offered a well-encompassing pallet of Norwegian projects, companies, and initiatives in the forefront of autonomous solutions at sea. Without being complacent, it is no overstatement saying that Norway is at the leading edge of this technological development, which became clear throughout the presentations and discussions of the conference. Topics covered several industry areas including aquaculture, offshore energy, ports, and freight of both passengers and goods out at sea, between islands and in the city, including an overview of the current status in other countries. Also displayed through the eyes of autonomy was the detrimental effects of climate change as an upcoming industry segment in its own right. This was demonstrated by NOSCA’s presentation (Norwegian Oilspill Control Association) looking for autonomous solutions to handle overwhelming amounts of the invasive algae species Sargassum that’s flooding beaches and tourism areas in Mexico and other parts of the world.

Autonomy as the solution to environmental and financial sustainability ran as a straight line throughout the conference such as in the example of the start-up Clean Sea Solutions (CSS). CSS together with PG Flow Solutions and Maritime Robotics has developed autonomous commercially and environmentally sustainable solutions for waterfront areas to prevent and reduce the inflow of marine plastic waste into the oceans. Thinking that public entities would be their main customers, CSS witnessed that it is private rather than public harbours and marinas that sees the business advantage in enhancing their environmental profile using autonomous solutions. Perhaps this is in part related to the matter of trusting autonomous tech solutions, a topic that generated much questions and reflections from the audience after an appreciated talk from NTNU on the creation of value and trust through design processing. This was one of the few slots covering the aspects of social sustainability in relation to autonomous mobility. Its importance was however emphasized by Innovation Norway as an important aspect in the new Horizon Europe funding and research program from the EU. In a world of transport where human error represent the major cause of hazardous situations and accidents, tech-faithfull developers and enthusiasts might be inclined to overlook this aspect. However, a closer collaboration between developers and end-users is a necessary means to an end when it comes to funding from the EU. 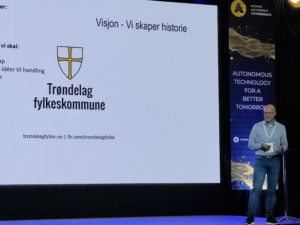 Trust, however, is not an issue for the Trøndelag municipality whom stated the bold ambition of becoming an internationally leading region of testing and operating autonomous solutions at sea.

Safety was a continuous subtopic, or, as in the case of SINTEF’s presentation – more of a main topic, when presenting significantly safer handling of FIBC (flexible intermediate bulk containers) provided by autonomous cranes. A good example of collaborative smart systems tracking and moving goods and assets and gradually becoming smarter and smarter to the point of full autonomy.

The degree of autonomy was also a re-occurrent theme and well described by the newly inaugurated SFI Autoship, an 8-years research-based innovation centre that will contribute to Norwegian players taking a leading role in the development of autonomous ships for safe and sustainable operations. A leading role that is currently manifested practically by the whole value chain. This entails both urban solutions such as Zeabus and Hydrolift, and short sea shipping by Massterly.

Another message conveyed at the event, albeit not so much spoken out loud but rather ”in between the lines”, was the notion of autonomy as the undisputed way forward, and the provider of next level sustainable services for public and private entities alike, both in Norway and abroad. And – the abundant opportunities and competitive edge from the national evolution of skills developed from the oil and gas industry, now transferred to the export of sustainable autonomous solutions instead.

As an autonomous mobility cluster, several of SAMS partners and collaborators were present and contributing to the program. It is our mutual ambition to shine a light on the sustainable opportunities provided by autonomous mobility solutions and to collaborate with even more public and private partners, nationally and internationally. Several calls under the Horizon Europe are of interest to us and our partners, please make contact if you think we have common interests.  Together we’ll pave the way for the autonomous route!